Ben Keil grew up in an Orthodox home in Northeast Philadelphia, and attended Jewish day schools through 12th grade. Ben earned bachelor’s degrees in Journalism and Religion from Boston University, where he was very involved in Jewish life, and met his wife Dana.

After graduating in 2010, Ben moved to New York City where he started teaching English Literature at a Yeshiva High School. In 2011, Ben and Dana were married; and while Ben continued to teach, he also took a position as an administrator at the Orthodox Union.

In the Fall of 2012, Ben and Dana moved to the West Side of Manhattan to assume the Youth Directorship of Lincoln Square Synagogue, where Ben also served as Program Director. After one year, Ben took on the Executive Directorship of the synagogue, a position which he held for two years prior to his arrival at Shapell’s. 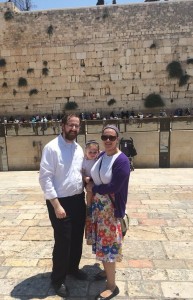 Ben has been looking forward to taking some time off of work to study Torah full time for many years, and is glad to be able to do so at Darche Noam. Ben and Dana arrived with their son Meir (who is almost two) towards the end of this summer. Ben learns in Rabbi Aryeh Feldman’s shiur in the morning, and in Rabbi Reuven Kamenetsky’s shiur in the afternoon. He also loves to learn with Rabbi Yakov Haber, and is a regular at his lunchtime shiurim on various subjects.

Dana graduated from BU in 2011 and received her Masters in Education from Hunter College in 2013. She taught students with disabilities in public schools in both Brookline, MA and New York City until finding Luria Academy of Brooklyn, a Jewish Day School, where she has served at the Director of Support Services for the past three years. Currently, Dana is the Director of Room on the Bench, http://www.luria-academy.org/rotb/ a resource which supports Jewish Day Schools in being more accommodating to students with disabilities.

While being Torah observant for eight years, Dana has sometimes felt lacking in her Jewish Education, having not spent any time studying formally. She is very excited to be learning at Midreshet Rachel v’Chaya.

Ben, Dana, and Meir live in one of the apartments in the Yeshiva, and when Ben and Dana are not learning, they can be found chasing a busy Meir around the building, as Meir directs others to “Daven” and “Learn Torah”. Meir has also advanced in his Torah studies since coming to the yeshiva, and is now proficient in the letters aleph, beit, and gimmel.

The Keils feel that they are benefiting not just from their studies at Shapell’s at MRC, but also from being in our Married Couples Program. Ben said, “We love being in an environment that has a program specifically for married students, because it gives us the opportunity to spend time with other young couples who share similar goals and values. The Shabbatot we spend together are beautiful, and we have small classes taught by the various educators in the Yeshiva and Midrasha on subjects that are of particular interest to couples.”

We are proud that the Keils are having such an impactful experience with us!