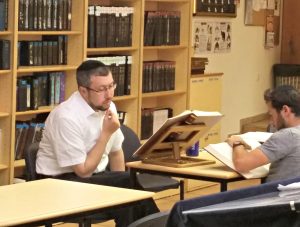 Tomas was born and raised in the city of Pressburg (Bratislava), well known in the Jewish world for being the home of the Chatam Sofer. Despite living under Communist rule, his family maintained its connection to the local Jewish community. This enabled him to develop a strong, emotional relationship to Jewish culture. After the fall of the Berlin Wall, this translated into his taking part in activities at local Union of Jewish Students and learning Hebrew at an Ulpan in Israel.

Tomas always had an interest in religious practices, so after finishing his undergraduate degree in economics, he started to study cultural anthropology with a focus on comparative religions. While it answered a lot of technical questions from outside of the various religions, it did not answer the most important one: “Why believe?”

The turning point came in 2006 when he moved to London for work. A series of small events led him to a particularly moving Yom Kippur service at JLE in Golders Green. From that time on, he started to learn about Judaism from the inside and grow in his observance of mitzvot.

After 5 years, life steered him to Vienna, Austria, where he worked at one of the country’s largest banks. There he was blessed with good chavrutot (study partners), with whom he started to taste learning Gemara and Halacha. However, his lack of a formal Jewish education was hindering his progress. Therefore, when an option for a Sabbatical year came along he did not hesitate. He decided, at age 38, to come to Yerushalayim to learn Torah at Shapell’s! Tomas shared, “The choice was easy, as all of the alumni I met readily recommended the place as an open, healthy yet intensive and challenging place to learn.”

Tomas has only been learning at Shapell’s for a few weeks, but he reports, “I already feel that I have made major advancements in all areas of Judaism! I am looking forward to the months to come.”