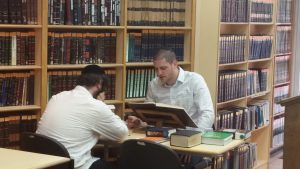 Joel grew up in Toronto, Canada and attended a Conservative Hebrew Day School and Community Jewish High School. His education in the classroom was a springboard to his wanting to apply the lessons of Judaism to his everyday life. While studying at he the University of Western Ontario, Joel connected with a few rabbis on campus and began exploring the daily mitzvot that had previously been absent from his life.

As he progressed in his learning and understanding, he realized that in order to solidify his newly discovered path as an Observant Jew, it was important to spend time in yeshiva. Joel remembers, “In speaking with my Rebbeim, and peers that had been through similar experiences, it became readily apparent that the philosophy employed at Shapell’s would allow me to discover my own path in Torah, while developing the skills necessary for lifelong learning.”

Joel began his first tour at Shapell’s in 2015, where he studied for seven months, slowly moving up through to various levels of shiurim, developing and enhancing his learning along the way.

After returning to Canada, getting married and working for a year, Joel has returned to Shapell’s along with his wife, Arielle who is studying at Midreshet Rachel. They were fortunate enough to have the opportunity to return for a short recharge during the Spring Zman, before Joel returns to the academic world to complete an MBA at the University of Waterloo. Joel shared, “We felt that this time would, and indeed has, allowed us to solidify our derech in Torah and help to establish the principles upon which we will continue to build an Observant Jewish home.”