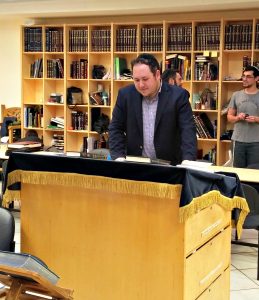 David Kaye was born and raised on Long Island in a conservative Jewish environment, where the importance of keeping kosher and maintaining Jewish pride were strongly held values. His grandfather was a guiding force in enabling David to recognize the breathtaking beauty that Hashem has provided. During David’s teenage years, his grandfather inspired him to firmly glue together a united, personal mission statement of elevating his neshama and connecting to Hashem. This enabled David to thunderously charge forward on his journey toward more intense involvement with Judaism.

After high school, David enrolled at Nassau Community College, where he started the entrepreneur’s club and became heavily involved with sports journalism (including covering two NFL drafts). Simultaneously, he befriended two visionary rabbis that provided his launching point into the Orthodox world. Soon places like Kew Gardens, Passaic and Monsey went from random locations on a map to vital landmarks. During that same year, he was fortunate to go on Heritage Retreats and developed an enduring connection with Rabbi Kreitenberg and his family.

David continued his studies at George Washington University where he quickly became an integral part of MEOR and the Orthodox community on campus, while regularly going to Silver Spring for Shabbat at Yom Tov. After graduation, David pursued his passion in the sports media and entertainment field, working for small publications and ultimately at ESPN New York. After covering the Belmont Stakes in June, 2015 when the horse American Pharaoh won the Triple Crown, David found himself davening mincha and maariv on the track while the horse’s Orthodox Jewish owners triumphantly celebrated.

David shared, “That experience was an ‘AHA moment’ of realization that I had recently “dribbled away from Torah learning and that the ball was in my court to make a meaningful change. I went from interviewing Kobe Bryant and covering the NBA Finals to learning in the Beit Midrash and talking to Rashi and Tosfot in a matter of weeks.” David had the opportunity to learn in Yeshiva Sh’or Yoshuv last year before setting his GPS on lsrael.

After surveying different options, David quickly realized that Shapell’s is the ultimate destination to learn how to learn and to seize a cherished opportunity for growth. David realizes that being here is a gift, and is using every moment to benefit from the experience. ”When you walk with Hashem amazing things can happen,” he said. “And to be immersed in an environment where illustrious rabbeim, students and staff are all equipped with a singular goal motivates me to challenge myself to even greater heights.”